DMS 4.1: discover the updated timelines and how it will work

This blog post was updated on 23.6.2022 to reflect the new timeframe communicated by Dutch Customs.

Did you know - 250 companies in the Netherlands use GPA (automated periodical declaration) and they are responsible for 95% of all declared goods, which is 180 million items per year?! So, it is a surprise that per an April 2022 Dutch Customs webinar, 57% of the attendee companies have not even started converting from AGS to DMS and are unaware of the pending impact to their business. But you are smarter than that by reading this blog.

Dutch Customs proposed to implement DMS 4.0 in a phased approach, aspiring to transition all declarants to DMS 4.0 by June 30th, 2023*. The phasing is based on the type of customs flows being executed by the declarant. However, DMS 4.1 is a different story. Customs would like to start a test phase by the end of the summer and plans to have completed all eight phases by June 30th 2023*. The phasing is also highly dependent on the customs flows carried out by the declarant.

As the rather lengthy transition from AGS to DMS continues for Netherlands Customs, we are keeping you informed of the latest updates and due dates on the DMS 4.1 phases, depending on the flow:

During this period, customs is planning to start the implementation for the first standard customs warehouses that wish to use DMS 4.1 without EiDR (Entry in Declarants Records) to make their customs declarations.

This is only for the customs warehouses that have very standard processes, so no inclusion of any certificates or chain arrangements yet. The implementation period is between September and December 2022*.

DMS 4.1 - Start of conversion for Customs warehouse with EiDR and without sanitary or phytosanitary certificates

This phase is foreseen to implement DMS 4.1 for Customs warehouses in the Netherlands with an EiDR authorisation, but without any sanitary or phytosanitary certificates.

The period is expected to last from December 2022 to April 2023*. Since this is later than the initial period planned by MASP, Dutch customs will have to manually send the data in the correct dataset during the period in 2023.

DMS 4.1 - Start of conversion for Customs warehouse with EiDR and with sanitary or phytosanitary certificates

This phase is foreseen to implement DMS 4.1 for Customs warehouses in the Netherlands with an EiDR authorisation and with sanitary or phytosanitary certificates.

The period is expected to last from January 2023 to June 2023*. Since this is later than the initial period planned by MASP, Dutch customs will have to manually send the data in the correct dataset during the period in 2023. 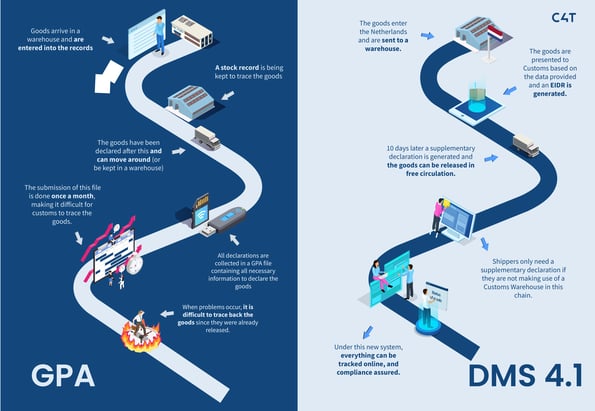 How will DMS work in the real world?

While you may think DMS is simply automation/digitisation of the Customs process, there are other subtle differences. DMS requires a different mindset compared to GPA with the slightly different flows. Traders need to know their volumes, think in terms of processes, and be aware that timing is key.

Briefly, DMS 4.1 allows traders to perform Entry into Declarants Records. This starts with the presentation notification, followed by an EiDR and, after 10 days, a supplementary declaration. At the same time, an audit file for the stock records needs to be maintained in a way that is prescribed by Customs.

A stock list, in a manner prescribed by Customs, is manually created (in Excel for example) and filed monthly. The goods are moved to the company’s warehouse and, once in their warehouse, they can make an entry into GPA, meaning goods are presented then entered into records. When that entry is done, they can then be legally moved into circulation. All those entries are compiled, and that file is sent (via a USB, for example) to Customs for validation. Customs reviews and may correct the declarations. The submission to Customs is only done once a month, often with little control or oversight by Customs, so the relationship is built on trust between Customs and the declarant. Problems can occur with checking the records, possibly even after the goods have already been delivered. The system is so manual, and with the overwhelming number of declarations, Customs is left with managing the system based on trust more than technical oversight. The old-school process utilised filing item lines for the declarations. But with the increased number of shipments, there must be a change of mindset.

The goods enter the Netherlands and are sent to a warehouse. The goods are presented to Customs based on the data provided and an EIDR is generated. Then, 10 days later, a supplementary declaration is generated, giving the status of the goods so they can be released in free circulation. Each entry into the records requires a separate supplementary declaration. Shippers only need a supplementary declaration if they are not making use of a Customs Warehouse in this chain. Under this new system, everything can be tracked online, and compliance assured. With this move from manual to electronic, real-time filing, Customs can more easily trace the goods. There is now also a line item/goods limit of 999 per declaration.

How it works with CAS

The Netherlands was one of the first countries CAS connected to for automatic declaration filing. As such, C4T has a close working relationship with the Dutch Customs authorities and will be prepared to connect to DMS 4.0 and 4.1 as soon as they are launched.

If you currently have a GPA or SPA permit, C4T’s customs experts can help you transition your declarations procedures for automatic filing using CAS.

If you are one of the companies that still needs to ramp up in DMS, we can help you smoothly transition to the new process. Book a CAS demo today.

*Given the changing DMS regulation dates, be sure to verify for the latest information.

DECO: the new e-commerce customs system for the Netherlands

How to obtain animal health certificates in the Netherlands